Casting Crowns former drummer Andy Williams has passed at the age of 49 from complications related to a serious motorcycle accident. The band shared the update on social media, saying that Williams passed early in the morning on Friday, July 9. “He fought a great fight, but the injuries that he suffered took a toll on his physical body,” Andy’s wife Kelly posted to Facebook. 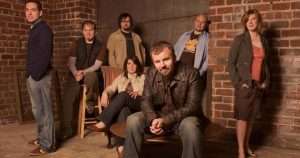 In a post shared by Casting Crowns, Kelly Williams added, “We hold fast to Paul’s words that we look not to the things that are seen, but to those things that are unseen, for they are eternal. We celebrate that Andy is in the arms of his Savior and we are grateful for the memories and laughter that Andy brought to all who knew him. We can’t thank you enough for your prayers, support, and unending love. You have walked with us through this very difficult journey and we felt you there the entire way.”

Amy Grant To Perform “Baby Baby” On ‘FOX And Friends’…

Kingzkid features MOGmusic and Akesse Brempong on a moving song…