Exclusive: Tauren Wells Reflects On Being Mentored By CeCe Winans Through Inspirational ‘Care It Forward’ Program

As we begin to emerge from a year of social isolation, and music and entertainment events begin to become a reality, the hardships of 2020 have many musicians questioning whether they will still be able to continue to chase their dreams. This is where well-established artists will help play a critical role for some lucky up-and-comers: CeCe Winans, Jennifer Nettles, and Shane McAnally are taking on an initiative called Care It Forward, as a way to pay it forward and help coach, mentor and support aspirational artists on the next steps in their career. In partnership with Cracker Barrel, these artists are launching Care It Forward, an initiative designed to help us all take a deep breath, reconnect, and inspire us all to pay it forward and care for each other just as these artists are doing. Rooted in the company’s history of caring for employees and guests like family, Care It Forward encourages consumers to share their own acts of care with #CareItForward on social to keep the effort going.

Through this Care it Forward program, CeCe Winans and Tauren Wells had an opportunity to work together for the first time. Winans has released a myriad of solo and collaborative albums that have crossed genres and influenced generations of gospel and secular vocalists. Her mantel today holds a staggering 12 Grammy Awards, 23 Dove Awards and 15 Stellar Awards. She has been inducted into the Gospel Music Hall of Fame, and received stars on the Hollywood Walk of Fame and Nashville Music City Walk of Fame. Wells is an eight-time GRAMMY nominee, former CCM Artist of the Year, and platinum-selling, multi-genre recording artist who undeniably is on the rise. In this TCB Exclusive, Wells talks about the importance of the Care It Forward program, the power of collaboration, and his upcoming tour.

Can you share what you learned about the Care It Forward program when it was introduced to you, and why was it important to you to participate in the program?
First of all, I’m a Cracker Barrel fan. Let’s just get that out of the way, up-front. If I’m on the road and need to go somewhere that feels like home, I’m pulling up to Cracker Barrel. I’m getting the Old-Timers breakfast, some cornbread and some blackberry jam. I’m walking through the Old Country Store thinking of things that I’m going to tell my kids they can’t buy. And just enjoying that time. And then you add to that the legendary CeCe Winans and everything that her music and her life has meant to me personally, as an artist. It was just a really cool opportunity to partner with her. And then the purpose of the platform is to get this message out that how we treat people matters – especially in today’s climate and social landscape. There is just too many good components to step away from this opportunity. I love the heart of it, the intention of it, and I hope we are inspiring people to care it forward in their own way and their own world.

You were selected to be mentored by CeCe Winans. We got the opportunity to speak with her, and she mentioned it was inspiring for her to hear how her career has impacted you, even before this partnership. Can you share how you felt about this pairing?
It is just so special. I remember when I first got started, I put out an album and it got nominated for a GRAMMY, and was in the same category as CeCe. And the producer of the album, Aaron Lindsey, said that you don’t want to be in a GRAMMY category with anyone with the last name Winans. Because they are just so known and what they do is so excellent. And CeCe is no exception. I was actually able to sing one of her songs to honor her and BeBe, her brother, when they were inducted into the Gospel Music Hall of Fame. So I have been in the same rooms with her and have honored her in different ways, so to stand side by side for this is just really special.

You performed “Until Grace” as your solo performance piece. Why was it important to you to share that song (with those lyrics)?
That song has such an encouraging message, which is really what I wanted to get across. You can’t go too far, you can’t get to a place where you are so low, that grace can’t find you and God won’t meet you in your greatest needs. And when we talk about caring it forward, there is no care like the care of Jesus Christ, who went the full distance to show love and grace and compassion and truth. So to have CeCe sing that song with me and shed light on that message, I just thought it was the perfect place.

You also have performed “Until Grace” with Gary LeVox. Can you share how this collaboration came to be?
Well I love that music is universal. That if you want to cross a boundary, write a song. Songs have a way of crossing political lines, religious lines, genre boundaries, and I have always loved all kinds of music – gospel to country. They all have the same roots. So it’s easy for it to come together if you want it to. Gary was one of my vocal inspirations growing up as a kid. I listened to every Rascal Flatts album and song. He was a perfect fit, and I was so grateful he said yes to being a part of the song. The only problem now is that I have a second version with CeCe Winans, and I can’t choose which one I love more. I love them both for different reasons, but I just think that we have an opportunity with the music we create to showcase diversity and what it looks like for two people from different places and perspectives to come together. And I’m grateful for Cracker Barrel creating the space for us to do that. 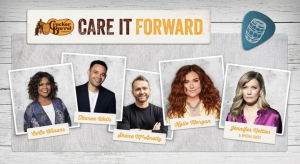 You announced a fall tour with Riley Clemmons and Andrew Ripp, set to start in October. How much preparation have you already completed in planning your set for those nights?
We have  been brainstorming and coming together for this tour already for several months. So this is going to be a year in the making by the time we get to the first downbeat in Grand Rapids, Michigan, my home state, 45 minutes from my hometown, kicking off this tour. It is going to be a movie! It is going to be ridiculous – the energy, the excitement, the power, the presence we are going to feel. We aren’t holding anything back – we have almost 24 months of cooped-up creativity that we are going to be putting on full display. I know Riley and Andrew are both so excited – they are unbelievable artists to see live, and I cannot wait for people to experience this tour!
The tickets are literally flying off of the shelves. We have several shows almost selling out already, and we’re almost 20 weeks away from the first show. So I’m really exciting that this is looking like a sell-out tour!

What are you most expectant for in the rest of 2021?
In the remainder of this year, I would borrow from where I attend church, Lakewood Church in Houston, TX. The whole theme for this year is ‘dream again, hope again, live again’. And I know we have all dealt with the turbulence of 2020 and trying to find the normal in 2021, becoming comfortable again and reacclimating to the new world that we find ourselves in. So I’m really hoping that same heart that my church has – that people dream again, that they believe again, that they would hope again. We believe that we don’t just hope in some vague thing – we have an anchor of hope, that’s real and steadfast, proven and true. And it’s okay to get your hopes, even if 2020 knocked the wind out of you. And ultimately that people would live again – that we would get back into restaurants and movie theaters and sports games and buildings and live concert venues. And really live again – in close proximity to one another without fear. So that’s what I’m hoping for coming to the close of 2021.