GRAMMY-nominated, Dove Award-winning StowTown Records flagship artist Ernie Haase & Signature Sound premiere brand new music today (July 9). “Keep On Keeping On,” the first single from their new studio record is now available to download/stream. The new song, largely inspired by the January 2021 Capitol Insurrection, is a preview of their Keeping On album which drops July 23. Written during the pandemic and recorded in Nashville, Keeping On is an offering of mostly original songs that were born in those days of testing and trusting. Keeping On follows the quartet’s album Something Beautiful, a tribute to the legacy of Bill and Gloria Gaither, which received a nomination for Best Roots Gospel Album at this year’s GRAMMY Awards. In this TCB Exclusive, Ernie recalls the conversation with God that inspired the single, previews the upcoming collection and also talks about a new streaming series “Friday Night Sing” set to premiere this fall.

Congratulations on the upcoming release of your single titled “Keep On Keeping On!” Can you share the inspiration for this track’s title?
I remember the song came to me on a dark, cold day in January. I was down in my spirits because for the first time in my life I didn’t have anything to wake up to. My Friday Night Sings were over, our schedule was still completely empty, and I was really having a pity party. Then my phone blew up with notifications and text messages of all the things that were happening in Washington D.C. I asked the Lord, “What in the world can I do? How can I make a difference?” And it was as if the Lord told me, “Ernie, just keep on keeping on. If all you have left is just one more breath, rise up in faith and take a step. Remind my children to keep on keeping on.” That’s where the song came from. So, yes that song came from a dark place, but it was the light that was shed in my heart that day that gave me the inspiration to remind my brothers and sisters to keep on keeping on.

Can you take us back to as you were creating “Keep On Keeping On.” Is there a moment during the process that stands out to you most looking back, perhaps that solidified your resolve to release this music?
Even though we had absolutely no tour dates on our calendar when that song came to me, I got together with Sue Smith and Lee Black and formed the song in a Zoom meeting. Then, I told my producer, “I want to get into the studio to create a record and I want to call it Keep On Keeping On. And even if we never go back to touring, music should never stop.” I think these songs born out of dark days are the songs that everybody needs to hear and that was the inspiration that solidified my resolve.

Which lyric within the track do you think the world most needs to hear at this moment?
The most simplistic lyric of the song is the second verse when it says, “God, God can be trusted and there is nothing that takes him by surprise. You, you aren’t forsaken, so don’t be shaken just lift up your eyes.” Faith is not something that just works when everything is well. Faith has a face and it’s Christ, and we place our faith in him. God can be trusted.

What was behind your choice for this track to be pre-released ahead of the full project Keeping On?
Simply because that is the message we’re going to be preaching, and we want to go out and tell everybody and remind everybody that these temporary, momentary troubles will fade. God is working in eternal glory, and we’ll know it when we see his face, so we’re here to remind you to keep on keeping on. We believe that so much so for our personal lives that we are naming our tour the Keeping On Tour. 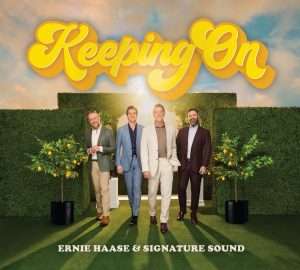 You will be releasing the single a few weeks ahead of your next album. How did you approach creating this album differently than past projects?
Once I made the decision to get in the studio and record this record, it was then and there that we reached out to musicians and programmers. We created this record, half of it in the studio and the other half programming, and everyone was working together at the same time. It was a process that came together very fast because everybody was working diligently to get this record out.

Success can mean many things to different people and situations. Have you thought about what success looks like to you for this single and upcoming project?
Success for me would be being able to see posts on our social media, emails coming into our office, and cards and letters of people who were right about to give up on their faith and to give up on life and to say these songs helped them keep on keeping on. I’m already hearing that from the past year because of the Friday Night Sing episodes that we performed, so that would be my success.

Who, or what, are some of your current biggest inspirations, spiritually and musically?
I’m listening to music all the time and a lot of times I’m listening to just sounds, so the biggest inspiration comes to me from taking long walks and listening to music. Creation, long walks, scripture, and just different sounds of music will inspire me. It gives birth to something that sounds nothing like I just saw or heard, but there is something about the beauty of creating that once you do, you want to share it with other people. You just don’t want to hold it in and to me that is the beauty – the end result of getting across the finish line and other people seeing the beauty in their own way. I can’t tell you how many people have come to me and heard a song, the same song, and talked to me that night after a concert about how it touched them in a different way. That’s the beauty of creating.

What are you most expectant for in the remainder of 2021?
I’m really excited about not only getting this new music out but also about the rebranding of our web show that we did, “Good To Be Home,” which we previously called “Friday Night Sing.” “Good To Be Home” is one of the singles from our new Keeping On record. I can’t wait for the fall and having those episodes air. Also, no longer is this about lockdown or COVID, this is about building the home and changing the culture one home at a time. Of course, we’re also excited about doing concerts and seeing people in person. That is always the pinnacle of being able to have fellowship with people and sing songs that keep us in the right, proper state of mind and help us to keep on keeping on.

Kingzkid features MOGmusic and Akesse Brempong on a moving song…